Go back to: Adults 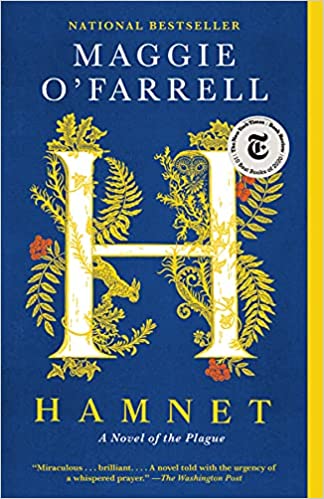 NATIONAL BESTSELLER and WINNER OF THE WOMEN’s PRIZE FOR FICTION

England, 1580: The Black Death creeps across the land, an ever-present threat, infecting the healthy, the sick, the old and the young, alike. The end of days is near, but life always goes on.  A young Latin tutor–penniless, bullied by a violent father–falls in love with an extraordinary, eccentric young woman–a wild creature who walks her family’s estate with a falcon on her shoulder and is known throughout the countryside for her unusual gifts as a healer. Agnes understands plants and potions better than she does people, but once she settles with her husband on Henley Street in Stratford she becomes a fiercely protective mother and a steadfast, centrifugal force in the life of her young husband, whose gifts as a writer are just beginning to awaken when his beloved young son succumbs to bubonic plague. A luminous portrait of a marriage, a shattering evocation of a family ravaged by grief and loss, and a hypnotic recreation of the story that inspired one of the greatest masterpieces of all time, Hamnet is mesmerizing, seductive, impossible to put down–a magnificent departure from one of our most gifted novelists.

The Plot by Jean Hanff Korelitz

Jacob Finch Bonner was once a promising young novelist with a respectably published first book. Today, he’s teaching in a third-rate MFA program and struggling to maintain what’s left of his self-respect; he hasn’t written—let alone published—anything decent in years. When Evan Parker, his most arrogant student, announces he doesn’t need Jake’s help because the plot of his book in progress is a sure thing, Jake is prepared to dismiss the boast as typical amateur narcissism. But then . . . he hears the plot.

Jake returns to the downward trajectory of his own career and braces himself for the supernova publication of Evan Parker’s first novel: but it never comes. When he discovers that his former student has died, presumably without ever completing his book, Jake does what any self-respecting writer would do with a story like that—a story that absolutely needs to be told.

In a few short years, all of Evan Parker’s predictions have come true, but Jake is the author enjoying the wave. He is wealthy, famous, praised and read all over the world. But at the height of his glorious new life, an e-mail arrives, the first salvo in a terrifying, anonymous campaign: You are a thief, it says.

As Jake struggles to understand his antagonist and hide the truth from his readers and his publishers, he begins to learn more about his late student, and what he discovers both amazes and terrifies him. Who was Evan Parker, and how did he get the idea for his “sure thing” of a novel? What is the real story behind the plot, and who stole it from whom? (Macmillan Publishers)

Already in a book club?  You can checkout sets of books from APL’s previous book club selections.  Each bag contains 8-12 copies of the book and check out for 8 weeks.

Questions about APL book clubs?  Email us at librarywebteam@cityofalbany.net